/ ABOUT US / NEWS / BEARS CRAVE FOR ARCTIC HONEY 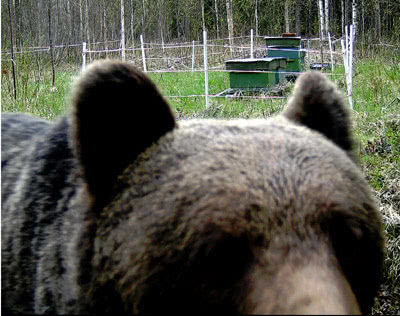 Despite the unusually cold summer we have collected some honey. It has been the coldest summer in decades. Some parts of Finland have lacked a single hot day, when usually they have over ten of them. In addition to the weather, the increased bear populations have made beekeeping a risky business in some areas. Without an electrical fence it would be impossible to keep bees in Eastern Finland.

Few weeks ago we got a good example of this by the Russian border in Nurmes, North Karelia. One of the bee colonies was looking for a place and settled in the middle of a swamp, where we then located the beehive. A week later we came to check it out, but the beehive was no longer there, as a bear had destroyed and eaten all of it.

We have received worrying messages from other beekeepers: They say, that even an electrical fence is not enough to stop bears with honey cravings. It is estimated, that there are over 2000 bears in Finland with a population increase of 10 percent each year. Usage of game cameras is increased, so the beekeepers get real-time information about the location of the bears and the damage they have inflicted. That’s also why we might get a real bear selfie in our e-mail address!

Climate change has also had its clearly noticeable effect also in Finland. Before we had cold winters with a lot of snow, followed by mostly hot and sunny summers. Now tables have turned, as winter is mild and summer is relatively cool. It is a big disadvantage for honey production in the north, where the summers are short to begin with. Luckily despite these challenges we have started the harvesting season and have collected a reasonable amount of honey.

You have a possibility to win a honey package worth of 60 Euro!

Stay up to date with novelties, special discounts and events. You are whenever entitled to cancel the newsletter subscription by contacting our customer service.

You have a possibility to win a honey package worth of 60 Euro!

Stay up to date with novelties, special discounts and events. You are whenever entitled to cancel the newsletter subscription by contacting our customer service.