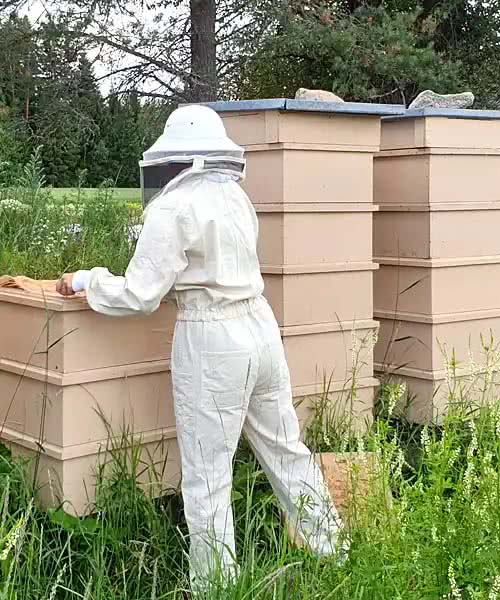 During the summertime Polar-Honey has almost 400 beehives located all around Finland from the western coast to the eastern border and above the polar circle. We use the traditional, ecological wooden beehives. Our 20 million honey professionals fly around during the summer for 15 billion kilometres and produce 20000 kilos of honey. The beehives hibernate in the western coast of Finland, where the weather is milder in wintertime. This way we avoid the losses in winter. Spring also arrives earlier in the west, which enables a long harvesting season for our bees. The end of the summer is busy time for the beekeeper, because the honey does not get produced all at once. The quality and quantity of the harvest depends on the weather and the flowers growing nearby the beehives.

History of beekeeping and honey

People have been using honey for over 15 000 years. Honey was the only known sweetener until the 13th century. The health benefits of honey have been known for thousands of years. Beekeeping begun, when people learned that natural beehives could be transferred to a hollow tree in the garden or to a dome made from hey. Collecting honey from these nests was difficult though. About a hundred years ago beekeepers started building their hives from layered squares and the production really took off, as the stacked hives made taking care of the bees easier. Collecting the honey was also more effective.

This is how nectar becomes honey 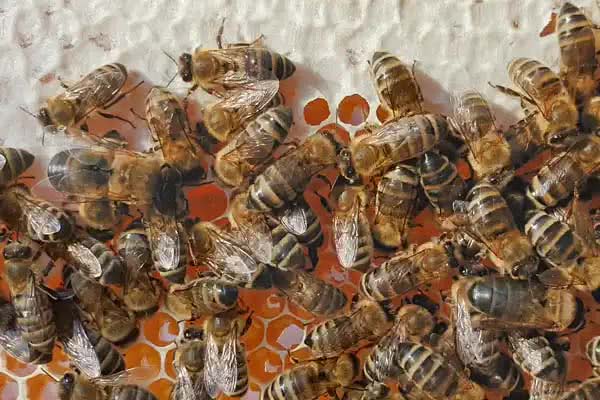 The season of honey production starts in March, when the queen bee starts laying her eggs. At the same time worker bees start their first attempts to collect fresh pollen as food for the larvae. Therefore, beehives are ideally located close to early-blooming flowers, such as willows, blueberries and alders. The actual season for collection of nectar starts in May and June with the blooming of blueberries and dandelions. Bees have their favourite plants, so thet carefully select the origin of the nectar.

Bees can collect and carry about 0,1 grams of nectar at a time. The bees returning from the field give the nectar forward to the home bees to process it. The bees refine the nectar with their own enzymes and convert the nectar into easily digested forms of glucose and fructose. Because nectar includes a lot of water, which easily starts fermenting in the warm beehive, the bees evaporate all excess water from it. The nectar is spread to several honeycombs to increase the evaporation. When the honey is ready, the bees cover the honey cone with airtight beeswax seal. During the summer, the beekeeper collects the ready honeycombs to extract the honey by a spinning process.

How the bees survive the -30*C of Nordic winter 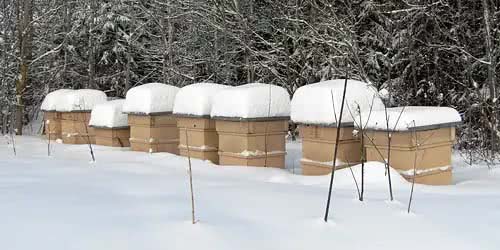 Summer bees require honey for their own nutrition, so the beekeepers can only get their share of the honey bees have collected to survive over the winter. In the autumn the beekeeper replaces the winter storage honey with sugar liquid. The bees process and store the sugar liquid for their nutrition. While collecting the honey, beekeepers also leave behind some pollen-rich honeycombs for the bees winter nutrition.

Worker bees born in the end of the summer create a winter cluster around the queen when the weather gets colder. The temperature inside this buzzing cluster is about 20 degrees. The bees move and feed inside the cluster. The bees staying in the outer layer of the cluster are tightly packed together and create heat by moving their wings.

Bees are sensitive for distraction when they are in their winter cluster mode. Winter storms or unwanted visitors can distract the peace of a beehive. That is why it is needed to do check-up visits to the hives also in the wintertime. At the end of the winter beekeeper removes the snow from in front of the entrance of the beehive, so the exposed ground enhances the heat of the spring sun. The bees are busy to start their cleanup flights, as they need to start their digestion after a long time inside the hive.

Bees communicate with each other with a sophisticated dancing language and they understand each others messages even in the complete darkness. Dance will show the direction of a good spot for nectar collecting in relation to the location of the sun. Bees visit around two million flowers to produce a 400-gram-jar of honey. The bees have lived on this earth for about 150 million years. 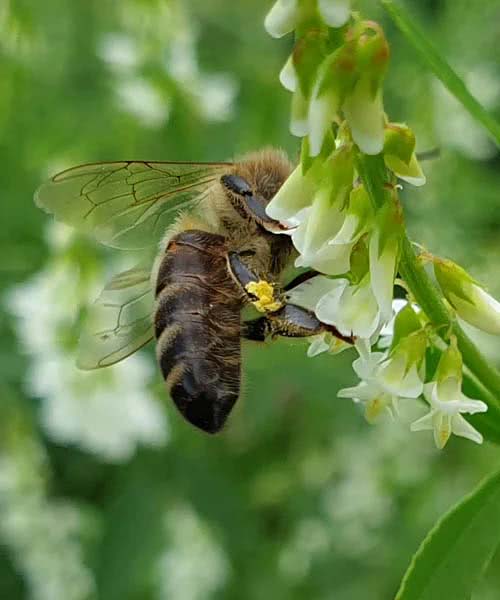 The bee society has a precise working order. On the top of the food chain is the queen bee, the mother, and there is only one of them in a beehive. If there are several queens born in the hive at the same time, the first-born queen bee bites the unborn queens honeycomb cups open and kills the other queens with her poisonous spike. Queen bee is a fertile female. She only flies during the wedding flight and nesting. The queen bee stays in one or two of the lowest layers of the hive. She can produce up to 1500 eggs a day.

The queen bee is responsible of creating new members to the society. The task also requires a male bee, a drone. Drones have an easy life but a short lifespan, only for about 1-2 months. They life in the hive in “all inclusive” care. In one beehive, there is about 500 drones. The mating does not happen with the queen in the hive though, but the drones can travel a long way. When a queen on her wedding flight meets drones, they mate. The drone has a price to pay for the action, as it dies on the process while the back part of its body gets ripped off with the queen. The fertilized queen returns to her hive and only leaves it in the case of nesting, if the hive is divided later. The drones are evicted away for the winter, so they are not supported there for the winter.

Worker bees are the ones, who work long days collecting the nectar and pollen from the flowers. During the summer time there can be over 80000 worker bees in the beehive. Most of them don’t hibernate. Worker bees are female, but they can’t reproduce, as their reproductive organs have withered. The flying season for the worker bees is short, only about 3-4 weeks. During the season it flies about 800km. It brings the collected nectar to the home bees, who process the nectar into honey.

You can win 93 Euro honey package!

Stay up to date with novelties, discounts and events. You can cancel the newsletter by contacting our customer service.

These cookies are necessary for the website to function and cannot be switched off in our systems. They are usually only set in response to actions made by you which amount to a request for services, such as setting your privacy preferences, logging in or filling in forms. You can set your browser to block or alert you about these cookies, but some parts of the site will not then work. These cookies do not store any personally identifiable information.

Marketing cookies are used to monitor the visitors of the web pages. The aim is to show commercials, that are suitable and interesting to individual users and therefore more valuable for the publishers and third-party advertisers.

Also known as “performance cookies,” these cookies collect information about how you use a website, like which pages you visited and which links you clicked on. None of this information can be used to identify you. It is all aggregated and, therefore, anonymized.

You can win 93 Euro honey package!

Stay up to date with novelties, discounts and events. You can cancel the newsletter by contacting our customer service.